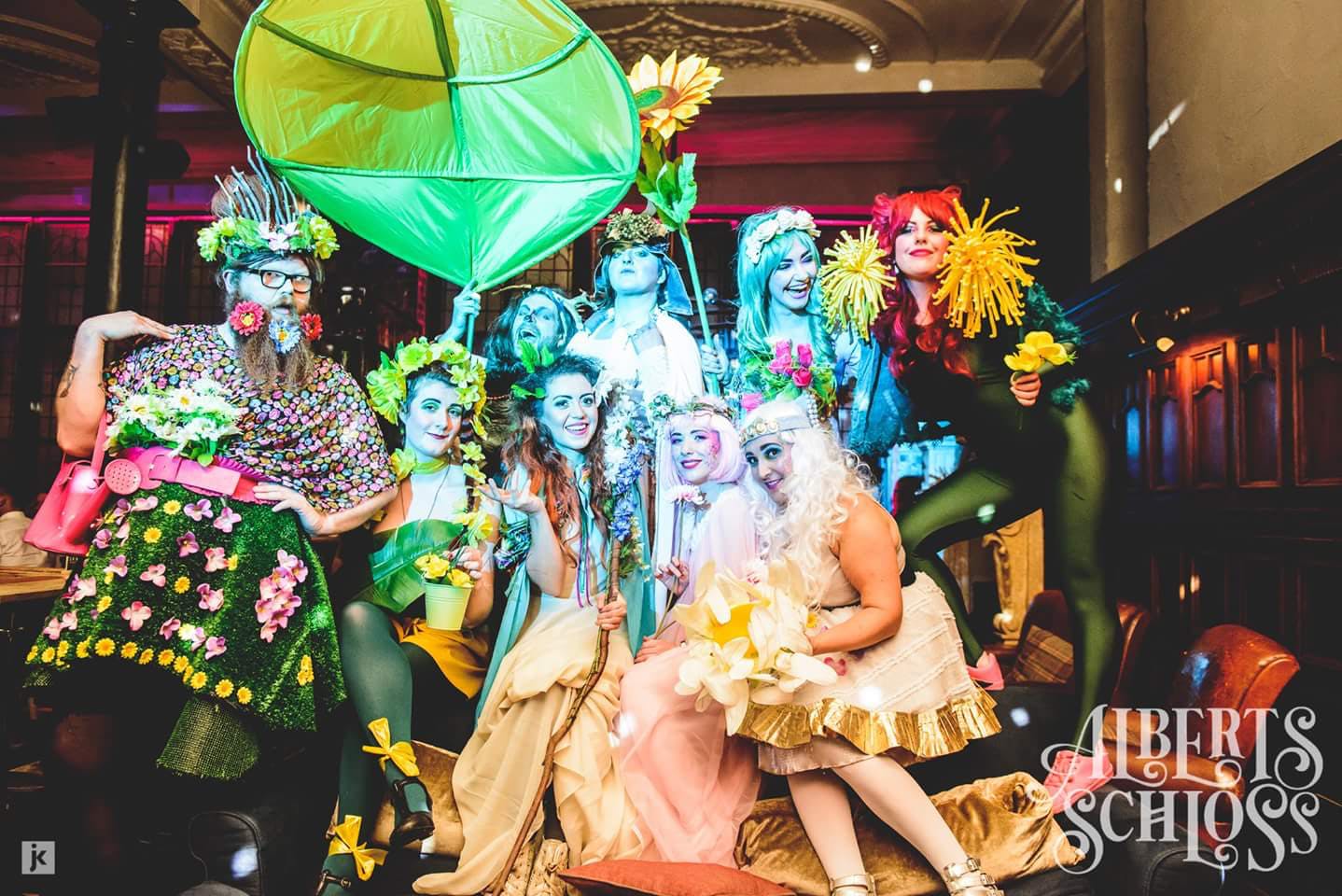 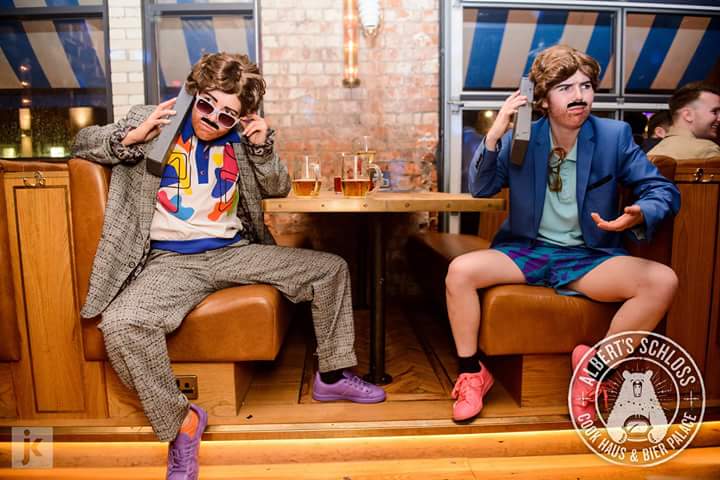 Last Halloween I carried a knife around with me all night and I made 3 members of the public cry, because they were so scared. In a good way. In a very theatrical way…theatrical fear. There was a lot of intense staring, similar to the work of live artist, Marina Abramovic, so it’s kind of inspired by her. “The power of stillness”. It worked and everyone was shit scared. I started in the restaurant area and every time someone stood up to go for a piss I’d replace their space with a knife. Maybe just a butter knife, but it was pretty funny anyway.

I was dressed as a 1940’s train conductor, shining people’s shoes with a proper shoe shining kit. One man wouldn’t let me shine his shoes, instead, heavily fuelled with Pilsner he told me he felt awful for me having to shine shoes for a living and told me that if I ever needed a job in recruitment he could GUARENTEE one for me as soon as I wanted. I couldn’t bring myself to break character so just thanked him but said shoe shining was a family tradition that I couldn’t possibly give up.

Nuala and I decided to play Australian hardcore KISS fans on ‘Rock’ night.

We convinced the public that Gene Simmons was going to be appearing upstairs at the Albert Hall- and even got a member of the public to rush through the crowd aided by the security guards with a blanket over his head as we chased after him screaming.

When the crowd realised we had ‘missed our chance’ to meet our idol, they proceeded to give us endless advice about how to sneak in. One couple in particular, told us how they managed to sneak backstage to an Oasis concert and even had a beer before getting kicked out! They offered to distract the security to get us a chance to get close to Gene! We never told them it was all a performance, but our faith in humanity was restored at the rebellious comradery! 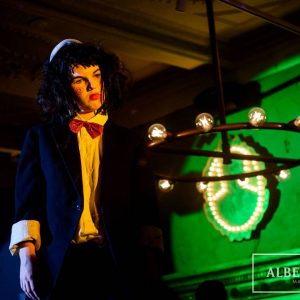 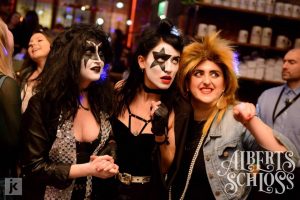 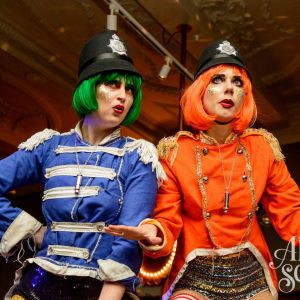 When we first started at Schloss many moons ago, Helen and I, played ‘The Dames’, Tabia and Opia Schloss. We were hosting a ‘band-eoke’ night and belted out ‘Mr Big Stuff’ dressed as 2 daring & darling old women. It was pretty funny & pretty magical. If you were there, you probably won’t ever be able to forget it. I know we won’t.

We really rinsed ski on the first winter, so on one of many ski themed night’s, Sal and Nuala became the greatest rap twins of the decade. We played two renowned polish rappers, who had a No1 hit that winter called “Slopes on Fire” and spent the whole night bouncing ridiculous slick rhymes off one another, freestyling at guests with impromptu rap about whatever we saw and signing autographs. If there was an opportunity to get a ski slope in Schloss, the twins would have it on fire.

One of the first times we crossed dressed, we wore these horrifically bright purple and pink pumps. At first, I thought they were an awful decision and a horrible mistake. However, they were actually key in making the whole night hilarious. We were as obnoxious and loud as our shoes and spent the night solving crimes, especially in the toilet.

We fashioned the glitter police from seeing too much glitter in the dressing room and having nothing to wear. We already had one sequin jacket, but proceeded to sought out another and accessorised our outfits with police hats and a truncheon. #FASHUN We then went about Schloss, fining people for bad dancing, or for having two left feet, or not having enough fun, not smiling enough, or misbehaving in the bar. 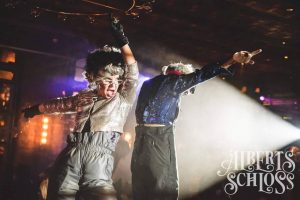 I played a ‘Space Rasta King’ for our Space theme night. I was wearing a hilarious costume which was this massive purple robe. It felt like a curtain and made it very difficult to walk around, but looked magnificent. On this occasion, Helen was the first person who entered the space and it was the first time we did a call & response as part of the introduction with the band. The crowd were completely in it, it was amazing. The response was insane. We all stepped out afterwards and just though, ‘huh- that was something special’. Then we went out and did it three more times. People were so ready to engage and get involved in this insane, beautiful, magical shift. That’s the beauty of it, when you least expect it, you just get hit with this strange energy that takes over the night. It’s a reminder of why we do what we do, as a group of creative people.

The greatest memory of mine at Schloss has to be Halloween 2016, getting in the back of a hearse to carry our ‘henge leader’ to be resurrected and perform an incredible set on the stage that got every single person in the Schloss dancing – dead or alive. The energy that night was unreal and totally unique to the city.

Few jobs allow you to stick socks down your trousers, act like a pompous prick of a man and ‘woof’ at every passing female that you see. However, as grotesque I was, I was surprisingly well received and thoroughly enjoyed myself.

I was supposed to be the embodiment of Spring. Joe has made my waist 20-something inches before, literally stitched me into costumes and his creativity and design flair never fails to impress me. This skirt came from me having no bottom half of my costume, and Joe was just like “I’ve got this piece of turf upstairs?” We gilded all my neck and I was just this spring dream, with the most fabulous astro turf skirt and flowers all over my body. It was just perfect. There is nothing that man cannot do. 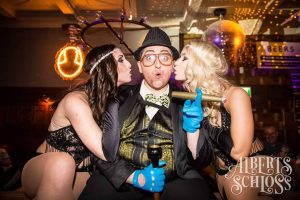 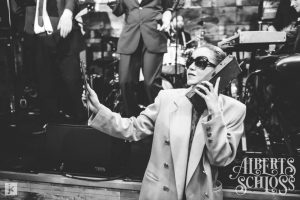